I didn’t know much going into this year’s SXSW conference, but what I did know was that I was going to find some way into the Rachael Ray Feedback party on Saturday morning. I had never attended before, because it kicks off at 10AM, meaning people line up at 8AM and earlier to get inside where there’s beaucoup free food, drinks and music. No lineup, however great, had ever enticed me to wake up early enough to get in. But this year was different. This year, Jenny Lewis was playing her only SXSW gig at this exact party. This year, I lucked into a press pass that allowed me to skip the line, unless the venue got to capacity, so I knew I still wanted to arrive reasonably early, but I also (blessedly) didn’t have to get up at the crack of dawn. This year, it was on.

Zack went earlier than I did to scope out the situation and try to make his way into the venue, which he did (shockingly quickly, I might add — the boy has skills). By the time I arrived, I was officially the first press pass holder over capacity, so I started the line for “my kind” while the general admission line continued to snake on into eternity. 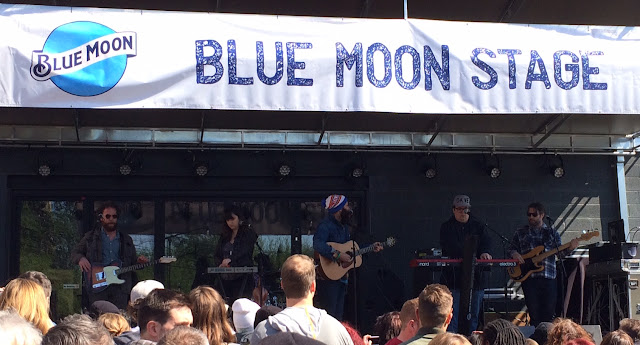 I made it inside without too much trouble, and Zack and I grabbed some free beer and then found a spot for a bluegrass band from Canada who were a little too earnest for their own good, and yet somehow worked for me in that moment. Maybe it was the cold front that had blown in the night before, putting me in that crispy-fall-air mood that I love to be in. Maybe it was because that mood reminded me of Utopiafest, the most laid-back festival I’d ever attended in Texas, with similar-sounding bands, yummy beer, and snuggling up for warmth with the one you love. Maybe it was holding Zack tightly as we whispered about how much we loved the guy in the “DAVE” hat in the band (who, as it turns out, is named Dave). Whatever it was, I thoroughly enjoyed them, and found myself willing to sway back and forth and clap on command.

After a harrowing and desperate experience in the port-a-potties that I’d like to never speak of again (we’ll just say “no more toilet paper” and “anxiety surrounding germs” and let you fill in the blanks), the next artist of note that we got to see was George Clinton and the Parliament Funkadelic. I had a history with this band and my mom, who would play them on our drives to school. My mom was always tickled that I noticed the high-pitched “wheeeeeeeeee!” in the chorus of “Give Up the Funk,” so we’d make a game of me singing that part to her every time it came on. I think this is one of the things that never fails to amaze me about SXSW — it brings artists of all calibers and tenures into the city of Austin, so that you can discover your favorite brand-new band (Coast Modern) in the same breath that you see a legend — in this case, George Clinton. 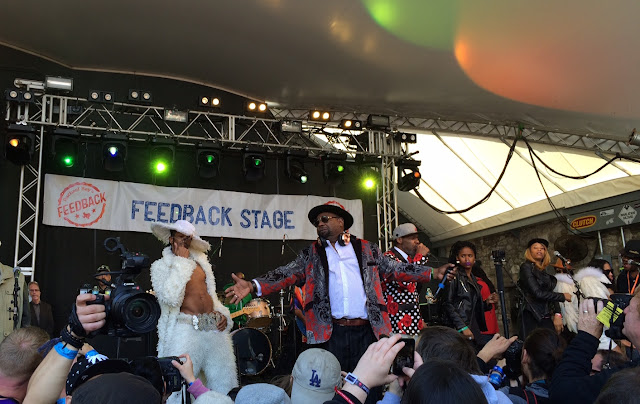 Now comes the difficult part. I have to describe a P-Funk live show. First, you need a sense of their mass. By my best count, there were at least 12 people onstage at any given moment during the show — Zack thinks this may have spiked to 18 at times, and I wouldn’t argue. Each person is their own amazing character, dressed individually and yet somehow coalescing into this alien movement. There was the woman in a white mini-dress with Go Go boots and angel wings; there was the blue-haired guy with holes all over the left side of his t-shirt; there was the woman in a classic black ensemble with a hat that said “DOPE” on it; there was “the Nose,” in shaggy white pants and a shaggy white jacket, with a sparkly belt that said NOSE so you could identify him, and a fake Pinocchio-like nose that had the words “FUCK GEORGE!” scrawled along each side. George, who no longer has his signature multi-colored dreadlocks, was in a silk-finished blazer with flowers all over it and rose gold headphones around his neck that I was coveting HARD. There were so many vocalists rapping, singing and/or soloing at any given time that it was impossible to know where to look — but that didn’t matter, because anywhere was fine. More importantly, the group almost demanded that we sing and dance along, and boy did we OBLIGE. Whether it was “Give Up the Funk” or “Flash Light,” I was dancing. It was probably the most physically involved I got all week, raising my arms when prompted, and high-fiving any band member who sauntered by (which, in this case, was “the Nose” and the holy-shirt guy). Ten stars out of ten, would see again. 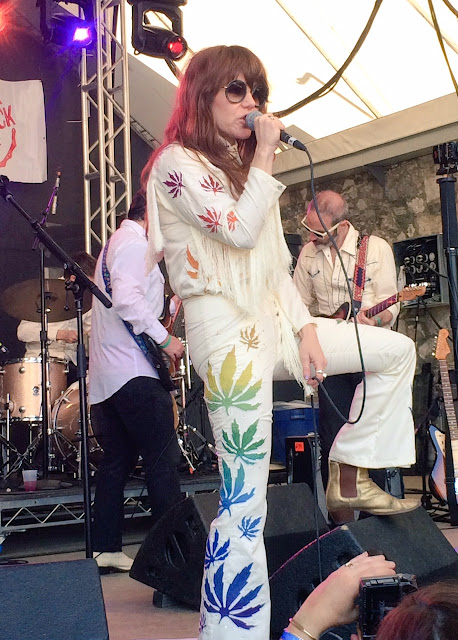 Then, we were one set-change away from my idol, Jenny Lewis. We’d managed to make our way all the way to the front row, against the railing, and I was grinning from ear to ear. Always a style maven, when Jenny finally emerged, she was in white bellbottom pants and a white button-down shirt with fringe hanging off the arms. The shirt and pants were littered with glittery, multi-colored pot leaves, and I fell more in love than ever. Other than “Silver Lining” and “See Fernando,” I think Jenny only played songs from her latest release, and because she is an all-seeing goddess who knows what medicine to feed us, she played its title track. Before starting in on “The Voyager,” Jenny said, “I need my box!” referring to her rainbow-painted riser that she likes to stand on. “It’s all I have in this world,” she joked, and then ripped my heart out of its chest with a heartfelt rendition of this song about hope, exploration, and figuring life out. I also was particularly grateful for “Head Underwater,” and it may very well have been in my head, but I would swear to you that she saw me raise my hand and sing along with her on the line, “There’s a little bit of magic, everybody has it/There’s a little bit of sand left in the hourglass.” I’ve written at length about Jenny’s magnetism, about how she commands a stage and every little movement feels indispensable. There is an effortless cool about her that I admire and covet — I aspire to find a method of self-expression that lets me live lighter, as she seems to by pouring her fears and dreams and imagination into her songs. Her 30-minute set flew by, and I was so enamored with her and lost in that space that I didn’t even notice the unofficial king of SXSW, Bill Murray, sitting in the photo pit about eight feet to my right. I’m glad I didn’t. We both deserved our uninterrupted Jenny-worshipping time.


After a perfect morning, we took a long break so Zack could watch his collegiate basketball team duke it out, and so I could get something healthier than a Flyrite veggie-patty sandwich and fries in my belly. Then, we rushed over to the best venue in all of Austin, the ACL Moody Theatre, for one last hoorah with Coast Modern. Their confidence had been building all week as they settled into their performance style. Coleman was mastering his dance moves and hitting the high notes every time. It was the last chance for Micah and Luke to scream, “JUST COMB MY HAIR!” into the best sound system they’d encountered in Austin. It had all come down to this, and I was excited to take advantage of what I imagined could be my last chance to watch this barn-burning indie rock outfit from the first row before they blow up and my old-person self is relegated to middle-crowd status. 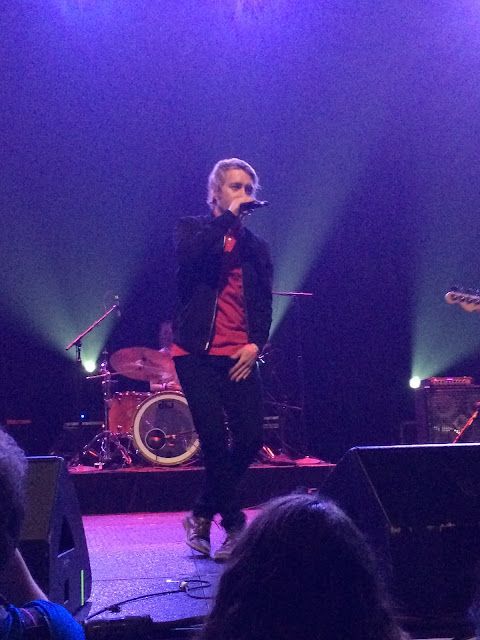 Zack and I made our way to the second row, and as we stood there, I overheard the people next to me talking about how excited they were to see Coast Modern in this venue. Keeping with my theme of speaking-before-thinking and talking to as many strangers as possible, I tapped the girl of the group on the shoulder and asked if they knew the band. She laughed and said, “Yeah, my girlfriend is the drummer.” “That’s so cool, they are so awesome!” I responded. “I know!” she said. I explained how Zack and I had been following them all week, and then said something awkward along the lines of, “We’re borderline stalking them,” but laughed because that makes it OK and not creepy at all, right? Anyway, we all managed to survive the conversation, and it was still nice to know that we were by real fans rather than random showcase-attendees. I do think we may have confused Coleman, though, who spotted our little group during the soundcheck, and visibly processed what was going on — I’d imagine something like, “Oh hey it’s Steph’s girlfriend! And…wait…that’s that woman that keeps showing up at our shows…do they…do they know each other? What…?” Except he probably knows Steph’s girlfriend’s name, but otherwise, this is my more-than-likely 100% accurate translation of his face. Outside of this confusion, I am hopeful it was a welcome sight to see a group of fans you’ve collected over your life and over the week, all ready to dance their asses clean off. I knew the setlist by heart at this point, and although we lost “Dive” to a shorter set time, otherwise every song sounded gorgeous through the giant Moody speakers, and Coleman in particular really blossomed as the frontman, egging the crowd on during the break in “Hollow Life” near the end. I felt close to blissful as I danced and sang along, really letting my weirdness out since the venue was also the darkest one they’d played in yet, and by the end of it, I felt completely content with my SXSW experience. I told Steph’s girlfriend-and-friends to tell the band that they were great, and she said she would, and Zack and I packed it in for the night and for the festival.

Now, realize — I skimmed over a LOT in this write-up. I skimmed over the waiting, and the bands that were forgettable or outright bad. I didn’t mention the handful of times that I was tired and grouchy and taking all of that out on my husband, and I tried to keep my own mental soundtrack to a minimum. I didn’t do these things because I want to present a shiny, perfect experience to you — obviously that’s not the case, or I wouldn’t have opened this epic saga with A Brief History of My Mental Health. The deal is, I wanted to share the moments that were healing for me. I wanted to recreate and relive the times when I felt like I was connected to someone, or to an emotion or thought in a song. I know not everyone is as lucky as I am, that I was able to take time off work to go live my dream for four days, in the music community where I long to be, so I hope that in some small way, this transfers some of the good vibes I’m going to get to survive on for the next 360 days to the rest of you. If nothing else, I hope it inspires you to check out these incredible bands making incredible art, and to support them, because they support the rest of us. 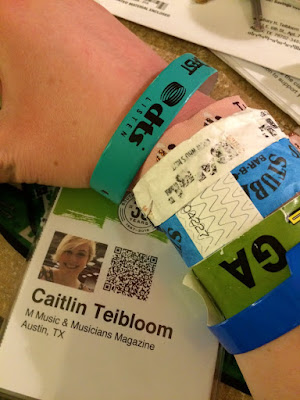