In my quest to conquer the SXSW 2016 artist list, Boraj (pronounced kind of like “Borahg”) was one of the first bands I really fell in love with. This year in particular, I found myself very bored by what I’d call “standard American indie rock” and/or “standard American indie folk rock” music, which made me especially drawn to anything that felt different. I wouldn’t claim that Boraj really lands THAT far outside of my normal musical tastes — they make sweeping, gorgeous music that feels like what nature would write in its winds and oceans and mountains, sort of like Sigur Ros, but from Chile and with lyrics in Spanish rather than Icelandic. With only two chances to see the group’s first-ever performances in the US, I begged Zack to try to get into their Tuesday night gig with me after we got off of work. With no credentials, I really had no idea how difficult a task this might be. Luckily, the first magic of SXSW ’16 kicked in this night — by paying the cover price of $10 each, we were let into Friends Bar before anyone with badges or wristbands, making it inside in plenty of time to get comfortable and make new friends.

Before Boraj started their set, I noticed a young woman with a cool backpack taking notes in a spiral notebook standing in front of me. She had a septum piercing and hair in pigtails, and something in me said, “Say hi!” So I asked who she was writing for, and she laughed and explained she was just taking notes for herself because she was a college radio DJ and wanted to remember things to say on her next show. I immediately felt a connection with her, since I had been a college DJ for 4 years. “Oh man, that’s how I learned about all the music I know now!” I told her. “ME TOO!” she said. We swapped stories about our favorite artists, and she wrote her radio show info in my phone so I could tune in to her next show (Monday nights, 7PM MST — look for the “False Friends” show by DJ Tijeras here.) I got to watch her hug her favorite artist at the showcase, a girl named Natisú who dressed in black skinny jeans, boots and a loose, silky button-down shirt — so much like my good friend Melissa that I had to take a photo of Natisú on stage later and text it to my pal, informing her that her style was being copied by a rock star from Chile. 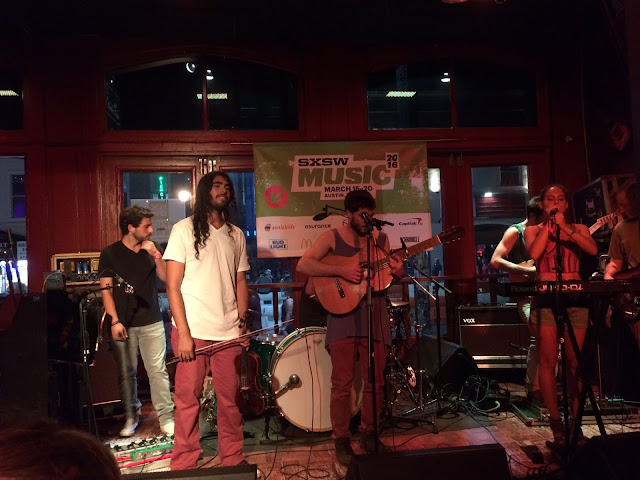 Boraj themselves were so completely charming and fabulous. There were sound issues in the room that made it difficult to hear the vocals (a shame, since haunting harmonies are one of the cornerstones of the music) but in the end it didn’t matter because the band was so thrilled to have an audience, and they looked like they were having so much fun. In that live setting, the Sigur Ros comparison disappeared a little bit, and instead Boraj reminded Zack and I of one of our favorite local acts, Little Lo — a band of friends making music they believe in together, because it’s fun and they’re talented and they want to create. After the band’s energetic set, we stopped the lead singer to congratulate him on a fantastic show, and he asked us again and again if we really liked it, needing to feel that reassurance to make sure he could really believe it. We freely gave our praise, feeling so happy to be a part of the moment.

I like to find new favorites at SXSW, since there are so many bands to see and fall in love with. But sometimes, you gotta put on that comfy sweater and your favorite sneakers. That was what led Zack and I to the Nomad Bar for my last show as a 28-year-old-woman — we wanted to be assured a good time, so we wanted Oberhofer. Oberhofer are a band I first learned of in 2010, when my insanely talented and super cool friend Pooneh Ghana recommended we try to catch them at the CMJ festival (the same festival where she introduced me to my beloved Drums). We never did, but two years later, I finally got to see Brad Oberhofer and company open up for Matt & Kim (and, quite frankly, totally overshadow the headlining act with their far more genuine presentation). Time Capsules II took over my life for a while, and then I got to stalk the band a little at SXSW 2014. The set list this time around was pretty similar to the one two years ago, but I am NOT complaining. Oberhofer have so many wild, fun pop rock songs that swell and burst open at just the right moment, so an encore — or four — of tunes like “Earplugs” and “Away Frm U” are always a blast. The highlight of the group’s Nomad set was a song I really had to dig around the internet for — titled “Dead Girls Dance,” there’s this haunting jam of a song that the band plays with a long instrumental part that allows Brad to wander around the venue for as long as he feels like — in this case, he physically exited the venue, walked out to the patio (presumably), and as I stood there watching his band furiously attack this song, I suddenly felt something on my leg. I looked down, half-annoyed, to see that it was Brad Oberhofer, crawling his way back to the stage through an unassuming crowd. Once he made it back to the stage, his guitar got caught on his mic stand, almost toppling it to the ground, but he was able to right the stand and himself without missing a beat. He was handed a shot of something clear, downed it, but promptly spit it out like mouthwash. At some point earlier in the set, he’d broken a guitar string, but instead of taking time away from the show to fix it, he expertly tuned his guitar to be able to play the “Away Frm U” riff — an impressive feat — and kept right on with the show. This 10-minute series of events put a huge smile on my face, and I head-banged through the rest of the set, feeling very involved in the process and connected with the band and myself.

Then, suddenly, I was 29 years old. Zack took me to Kerbey Lane Cafe, a 24-hour diner chain local to Austin, and we ordered chips, queso, and a brownie sundae to ring in my new year. We talked about moments in the shows we’d seen, mused on the characters filling the diner and standing outside of it, and winded down, prepared to dive into a badgeless SXSW the next day — my first in 10 years. I contented myself with the great experiences we’d already had, and felt hopeful that we’d make the most of the conference. I had no idea how great it was going to be.