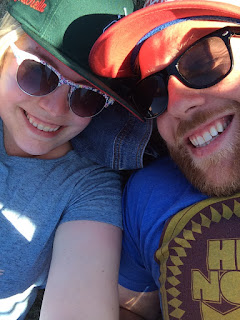 I met my husband at a music festival five and a half years ago — the same music festival where I saw LCD Soundystem for the last time before they broke up. After enjoying a riveting performance that opened with "Dance Yrself Clean" and ended with "Home," I picked up a CD copy of This Is Happening from the Waterloo Records tent and blasted it in my car the rest of the weekend. I had no idea that the band I fell head-over-heels for in that moment would break up a few months later; I had no idea the guy I feel head-over-heels for the next night would be the man I'd marry. When Zack and I made "the five year bet" — when he bet me that LCD would reunite within five years, and I said it wouldn't happen, and if it did I had to buy us tickets to their show and if it didn't he'd buy me tickets to any show I chose — I didn't realize how much significance five years would have for us. Before that landmark anniversary hit for the day we met, we were married. And *just* before the five-year anniversary of their breakup, LCD reunited.


The first song Zack and I bonded over was a love song — LCD Soundsystem's "I Can Change." It featured throughout our relationship, quickly becoming "our song." I had a bunch of Austin artists cover the song as a Valentine's gift to Zack once; he had local cover band All My Friends play it in our living room when he proposed. It was the song we danced to as our first dance at our wedding. I thought we'd never have the chance to see LCD play it live, and then — the announcement. The band was back. James Murphy had new music. They were going to Coachella. We hardly thought about it, it was just decided — we'd return to the California desert, sleep on the ground, and see our band.

We showed up at the main stage during Of Monsters and Men's set, almost four hours before LCD was scheduled to play. Bit by bit, we made our way to the railing on the left side of the stage — we were stuck behind the VIP section, but as close as GA could get on the left side and it felt right. We tuned out talkers during M83's solid set, watched bros live their best life during Ellie Goulding, jumping up and down together in a hug-circle, and then suffered through a couple making out right by our feet to get to what we'd yearned for — a disco ball, a ton of instruments, and a bunch of substitute teachers playing heart-wrenching dance music.

"Us V Them" gave us a chance to mock the VIP'sters chattering in front of us with arms crossed, letting us define our fandom outside of their hip be-seen/scene attitude. "Daft Punk Is Playing At My House" made me think of my brother, and how that song used to make me feel closer to him when I'd play it on my college radio station. And then, I collapsed. Holding onto the railing, I melted, just briefly, as the bloopy synths of "I Can Change" rang out across the field. When I pulled myself back up, Zack gripped me tightly, his arms surrounding my shoulders, and he didn't let go for the entire six minutes as we sang to each other in disbelief. And that was just the third song.

I don't know what it is about LCD Soundsystem that gets me on such a deeply emotional level. I think it's partly James Murphy's self-reflective lyrics, his admittance at a desire to be accepted and appreciated, but his simultaneous ability to laugh at that vulnerability. It's definitely the emotional attachment I have to the music with my friends — with Zack, and my dear Melissa, who I called twice during the set so she could experience it with me (just like she did for me at the final MSG show). Zack and I got to leave everything on the dance floor at this show, so to speak — it was a set list that would have made our local cover band, All My Friends, proud, filled with B-side jams like "Get Innocuous!," "Tribulations" and "Yeah." But it had all of my favorite hits, too — "Dance Yrself Clean" and "Someone Great" and "Losing My Edge" and "Home." Murphy really kept himself to his no-talking policy, opting instead to play as much music as possible, and I think that speaks to how much he missed his band, too. He just wanted to hear as many of his favorites as possible, just like us.

It feels like Zack and I have experienced a true full-circle moment in our lives and relationship now. Truly, Friday at Coachella felt like a peak life moment. I'd been nervous leading up to the festival — maybe it wouldn't be fun, maybe I'd feel self-conscious the whole weekend surrounded by pretty California models, maybe I'd be far too in my head to live in a moment I'd dreamed about for so long. But I had nothing to fear. With James Murphy at the helm, and my husband on my arm, I truly had all I needed.
Posted by Caitlin at 2:46 PM